The purpose of the New Investigator Award is to recognize scientists who have obtained a doctoral degree and are actively conducting academic, industrial, consulting, or regulatory studies.

To be eligible for the award, the scientist must have obtained his or her doctorate no more than five years before the time of the Fall ACS National Meeting. Thus, for 2020, applications will be considered from scientists who have obtained their doctorates no earlier than the year 2015.

Nomination Deadline:
For 2020 NIA applicants, the extended abstract, curriculum vitae, and letter(s) must be received by the New Investigator Award (NIA) Coordinator no later than March 30, 2020. A 300 word abstract should also be submitted via the ACS website prior to March 30, 2020. 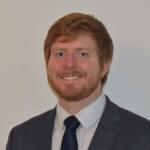 Edmund Norris received his PhD in Entomology and Toxicology from Iowa State University in 2018 under the supervision of Joel Coats and Lyric Bartholomay. For his dissertation, he explored the ability of plant compounds to enhance a variety of synthetic insecticides against mosquitoes, but he also focused more broadly on natural product chemistry and the mechanisms by which natural plant compounds affect the physiology of medical and veterinary pest insects.

Edmund is a post-doctoral research associate at the Emerging Pathogens Institute under the direction of Jeffrey Bloomquist at University of Florida. Edmund is interested in the development of novel repellents and insecticidal formulations that may circumvent insecticide resistance, while primarily focusing on natural products as his inspiration. His research focuses on better understanding the mechanisms of novel insecticidal, repellent, and synergistic agents using a variety of electrophysiolgical, pharmacological, and biochemical techniques.

Scott O’Neal earned his Ph.D. in Entomology from Virginia Tech in 2017 under the direction of Troy Anderson. He also holds a BS in Genetics and Microbiology from Purdue University and a MS in Forensic Science from Virginia Commonwealth University. As a PhD student, Scott was awarded a USDA NIFA predoctoral fellowship to investigate ion channel-mediated regulation of insect cardiac function and antiviral immunity.

Scott is a postdoctoral fellow at the University of Nebraska-Lincoln (UNL), where his research focuses on understanding the molecular and cellular mechanisms of insecticide resistance in the mosquito species Aedes aegypti. He was also recently awarded a USDA NIFA postdoctoral fellowship to continue investigating the physiological mechanisms that regulate insect antiviral immunity. His overall research goals are 1) to improve upon existing and develop novel vector control strategies, 2) to improve understanding of the regulation of immunity in agriculturally and medically important arthropod species, and 3) to reduce the negative impact of off-target pesticide effects on beneficial arthropod species.

Scott has been recognized with numerous awards and honors, including the 2018 Entomological Society of America North Central Branch Excellence in Early Career Award and the 2018 UNL Outstanding Postdoctoral Scholar Award.

Leslie Rault is a Postdoctoral Research Associate in the Department of Entomology at the University of Nebraska-Lincoln (UNL). Leslie’s research, under Troy Anderson’s guidance, focuses on elucidating the role of cytochrome P450s and ABC transporters in insecticide resistance and in response to insecticide exposure in Aedes aegypti mosquitoes. She has received a USDA NIFA postdoctoral fellowship to examine new targets for the control of acaricide resistant Varroa destructor, an ectoparasite of the western honeybee, Apis mellifera.

Leslie guest lectures for the course Insect Physiology, is the instructor of the online graduate course Insecticide Toxicology, and works on developing new teaching material. She is active in the Department of Entomology as an officer of the Science Literacy, Safety, and Emergency Preparedness committees.

Leslie obtained her PhD in Entomology at UNL in 2017, seeking to identify the molecular mechanisms of the resistance to Cry3Bb1 in the Western corn rootworm Diabrotica virgifera virgifera under the supervision of Nicholas Miller, Blair Siegfried, and Gary Brewer. She received an MS in Systematics, Evolution, and Paleobiodiversity from the University Pierre et Marie Curie in Paris, France, and a BS in Life and Health Sciences from the University of Nice – Sophia Antipolis in Nice, France.

© Copyright 2020 AGRO Division - All Rights Reserved
Back To Top
×